Oh no he didn’t… well, he did. But he didn’t. Let us explain: Yesterday, Twitterverse and Supernatural fans were quite surprised to read a Tweet from Jared Padalecki regarding the size of his… penis. Even his co-star Jensen Ackles responded.

I don’t mind having a small penis 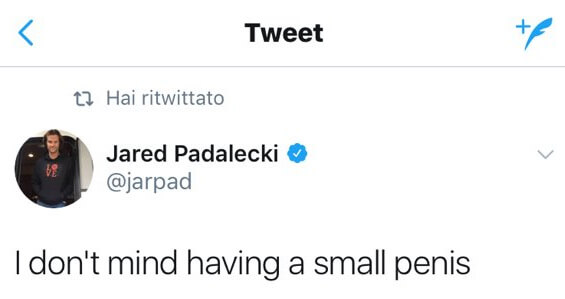 Jensen Ackles, who plays Jared’s brother Dean on Supernatural, was quick to respond:

Sharing with your friends is one thing…sharing with the world is another. Lock it up dude

Sharing with your friends is one thing…sharing with the world is another. Lock it up dude. 🙄 https://t.co/msOmrEHjHt

While fans were debating the Tweet, and – let’s face it – the size of Jared’s penis, Jared eventually deleted the original Tweet, and wrote an explanation – his account was hacked! Sort of…because he blames his other co-star, Misha Collins, for the prank.

Yup. Got Twitter-hacked. Taste of my own medicine…. I'm guessing it was @mishacollins
Now I plan my revenge.

Of course, fans were quick to capture the original Tweet, so now we’ll always have this to look at:

Maybe it’s time for Jared to live up to his promise from last week, when he said he would show us a nude pole dancing video? It’ll help set things straight…