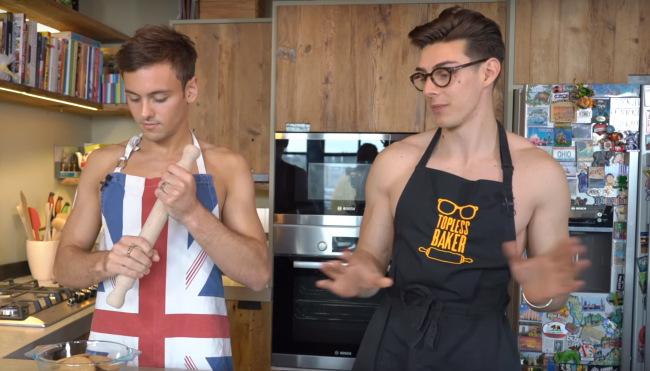 Matt, the son of a former Michelin star chef, has been cooking for several years, and has a very popular YouTube channel. He wasn’t very good at it at first – so he did what every aspiring chef does – he got in shape and took his shirt off. “Someone at work suggested that I should bake, and I should do it without my clothes on”. And the rest is history!

Mike and Tom got together for TWO special baking sessions, baking a beautiful Christmas cheesecake on Tom’s channel, and a hot Cheesecake on The Topless Baker’s channel.

“I was never shy about getting topless”, Tom explains, and joins his fellow baker in getting half-naked.

And it all ends with Tom taking a big Chocolate Snowman straight into his mouth. Good times were had by all.

And here’s the one from Tom’s channel: