Now this is a weird combination – openly gay singer-songwriter Steve Grand, in a very… “bulgy” Halloween costume – standing in front of an anti-gay Christian rally. Only in America! 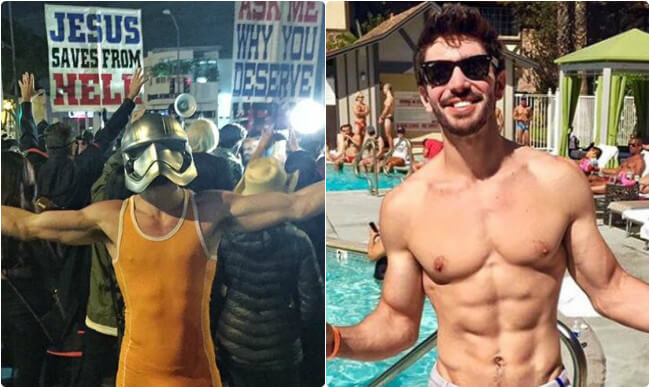 Steve, who thankfully isn’t shy about showing us his bulge, posted the photo on Halloween. His costume seems to include a silver storm-trooper helmet, and a VERY revealing singlet.

He’s standing in the middle of a Christian anti-well-everything rally, with people holding signs such as “Jesus Saves Us From Hell” and “God Hates… Homsexuals” (and plenty other things).

Even if the protesters didn’t know Steve was a famous gay singer (because of the helmet!), they HAD to be impressed by that bulge, right?

This, however, was not the only singlet Steve was wearing this Halloween – as we also got a peek at this one:

Pinned this one down outside @halloweeniela. Oh what a night. @ohhhtrev