Intense sex can be a lot of fun. But sometimes, it can get risky. And when you think you just killed your boyfriend from too much sex – then it’s downright scary, as this confession on Reddit reveals. 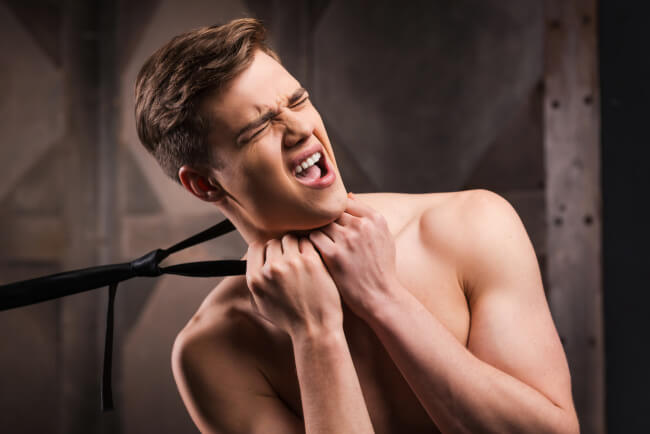 “My boyfriend and I went for a bike ride on Monday afternoon”, starts the tale. “He took a curve a little too fast and went over his bike. It was minor enough that he got right back up and rode the last few miles of our trip with no issue, so I didn’t give it much thought. Later that night, though, he mentioned he may have hurt himself. I tell him it will feel better in a few days and don’t think anything else of it.”

Wednesday night he says he’s feeling better when he comes over to my place and we end up having some pretty rough, intense sex. I’m talking candles lit, clothes thrown all around, blindfolds, belts, room just smells like fucking sex.

He gets his while I’m on top and I can tell that he’s hurting. He’s trying to laugh it off but I’m accusing him of not being honest about how much pain he’s in. He says he’s fine, he just needs to not move for a minute.

After a few minutes, he gets up to stretch and all of a sudden, he’s in agony. He starts writhing on the bed and holding his chest and tells me that he’s not okay and that I should call 911. He’s breathing so hard he’s almost hyperventilating, he’s clammy and sweaty and pale.

I’m trying not to panic, but… It’s at this point I should mention that he’s 14 years older than me – I’m in my late 20s and he’s just over 40. We make jokes all the time about how he’s an old man and can’t keep up with me, but I’m actually convinced now that I’ve sexed him to death and he’s about to have a heart attack and die.

I call 911, get paramedics on the way and try to keep him calm while I try to get his underwear on (at this point, we’re both still completely naked).

The paramedics arrive quickly and I have to explain what’s going on. I feel it necessary to add that it started while we were having sex because I’m still thinking he’s having some sort of heart issue.

We give them the full rundown of events since Monday and they tell us it’s most likely a broken or fractured rib and that there isn’t a whole lot to be done, but that all of his vitals look fine.

It’s ridiculous and uncomfortable, but at least he’s not going to die in my bed. We all have a good laugh, they leave….and my boyfriend proceeds to heat up some leftover Chinese food and then we go to bed. It was a memorable night.