A while ago we told you about a gay artist, who draws and publishes every penis he gets on Grindr (and from other sources), and plans to get to 1,000. This week, his story took a new turn, with a coming-out story that will really warm your heart.

Since the previous article, the 22-year-old art student not only continued to draw a lot of dicks (and post them on tumblr), but he was also featured in a Playboy article.

Returning to Reddit, the artist told the story of an empowering moment in his gay art history class, where he was asked by his professor to stand in front of the whole class and talk about his dick pic drawings.

“Everyone looked at me bewildered when they found out I already have almost drawn 300 dicks.

Well, long story short, he grins and asks me if I’m “on Grindr purely for the art.” Not really suspecting him to ask me that, I slowly reply, “……Yeah..”

Following that, he decided to finally come out to his mother. He’s been thinking about it for months, and after coming out to his older brother, he decided it was time to tell his mother he was gay.

“It was just us two in the living room watching TV. I could feel my heart race just at the thought of opening my mouth. I couldn’t believe I was about to say anything. Then I grabbed the remote. I muted the TV. She looks at me, confused. I tell her I had something to say.

Immediately she looks at me, her heart breaking before my eyes. She asks me what’s wrong; I can tell she’s scared. I told her I was sorry, and then I finally told her I was gay.

She instantly pulled me over and starts to give me the biggest hug of my life. We started to both cry into each others shoulders. I remember almost everything she said. I could tell she was so relieved.

“Oh honey, I was so scared something was wrong.” I kind of didn’t expect her to say that. It’s bringing tears to my eyes right now.

“What a heavy burden to carry.” She whispered to me. She asked me how long I had been holding it in for. I told her a long time. We both cried some more, and I will never forget what she said next:

“I just don’t want you to get hurt, man or woman. We all need love. Love is the only thing that matters in this world, and I love you.”

At this point I was completely numb. I had been holding this in for so long. It didn’t feel real. I didn’t want to let go of her…

Within five minutes of coming out to her she is asking me if I was still single. I told her I was. Without hesitating she had to remind me that the neighbor’s son was gay too. I could not help but to laugh like crazy. God, I couldn’t believe what was happening.

By that night everyone knew I was gay. 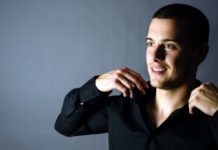 Just Came Out As Gay, My First Hookup With A Man Was A Disaster