What do you do when your online date turns out to be a bumbling fool? Or when you find out he’s been stalking you for weeks? Or end up with someone who wants to cover you in leather?

These and other crazy dating stories are the subject of British filmmaker Carl Loughlin’s new short film “LoveSwiped“. 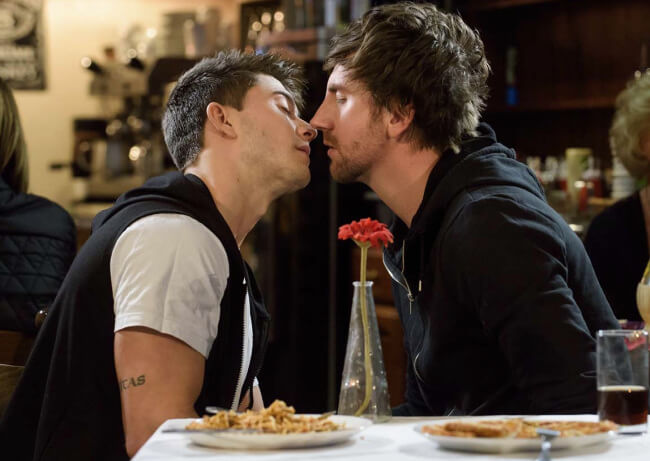 It’s a charming little film, just 12 minutes long, that will make you laugh, get you annoyed, and even warm your heart.

The hero (played by the film’s creator, Carl Loughlin), a gay man who finds himself single after ending a 10 year relationship, storms into the app dating world – where he meets 10 very different type of men – men we’re all too familiar with.

The events, it turns out, are based on Loughlin’s real-life experiences. “I was in a civil partnership for six years”, he tells us, “Together for 10 years, and when I was divorced and then suddenly in this single gay world, it was all a bit scary.

“I started dating people off apps, and became a serial dater. I thought it was more of a numbers game – if I met 100 men, then at least one will be ‘The One’.

“Bit by bit, as time went on, bad date after bad date, I realized that although it was a way of meeting people, they either wanted sex or were not like their profile suggested, or I had imagined them to be so much different from real life.”

The film depicts 10 dates: 10 men, 10 chances to fall in love, each with its own crazy little antic – A french man who doesn’t even speak English, a guy who’s a bit too sensitive about his weight, and even a handsome Mr. Perfect, who is perfect in every way – except for one little thing…

Were these men you’ve met in real life?

“I have had dates where they don’t speak English, dates where we have argued and they have stormed off, dates where I have bumped into their ex at the next table.

“Most of the interesting dates made it into the film. I did however meet my best friend from an online app, so the people on them are not all bad.”

Did the actors contribute some of their own stories to the film?
A lot of the actors are gay themselves and when they read the script they said to me “this is like my life!”, which is the response that I wanted.

The straight actors kind of understood – but to them straight dates are different I think, as women tend to not be as blunt and brutal as “are you a top or bottom” or “FUN NOW?”.

What about your current dating situation?

“I now don’t do online apps. I am going to use the film as an opportunity to appeal to any viewers who watch me on my quest for love to submit themselves through the website too. So maybe I will find love after all.

“Maybe someone watching would be in a similar position to me, watches the film and thinks “I think I would be MR RIGHT”. I cant promise to “date” everyone, but I would certainly try to get to know someone I liked.”

LoveSwiped was filmed over a day, in Bella Sardo, an Italian restaurant in greater Manchester. It premiered on February 29th in Liverpool, but you can watch the whole thing right here: