Orlando is widely known for its many theme parks – usually places of love and joy. After the tragic events at the “Pulse“, theme park employees around Orlando – and all over the world – are teaming up in an emotional tribute of love and solidarity.

In wake of the Orlando massacre, people are turning to social media to show their love and support for the LGBTQ community and the people of Orlando. One such tribute was compiled by Kevin O’Brien, a veteran of the theme park business, who started publishing photos of various theme park show casts, with the actors forming the heart sign with their hands.

“This is family”, Kevin wrote on his first Facebook album,  “We are one, strong band of people. From entertainment, costuming, techs, attractions, merchandise, custodial, and all other depts. Show that there is love out there!”

The photos have been pouring in, being sent to Kevin from around the world, and by now he has more than 80 on his page, in several posts. “Thank you Everyone from around the world and back. I’m just so overwhelmed. I love you for doing this and showing LOVE conquers HATE.” 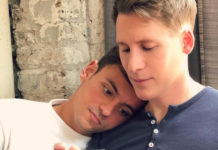