Young people are often scared of coming out to their parents – let alone their conservative grandparents. Well, this young man won’t have to – because his father outed him… accidentally. But when the grandparents started being mean – their son wasn’t going to have any of it. 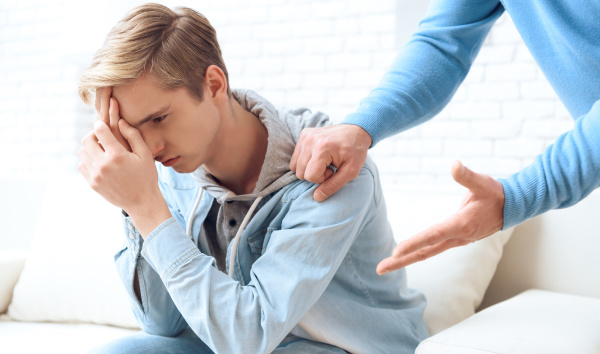 This all happened to this father on Reddit, who after “a dozen panic attacks” came to vent and seek advice.

“So tonight I stopped over my parents’ house as I normally do every Friday on my way home from work.

It was the usual small talk with them, weekend plans, kids, etc. etc. Monday is my son’s 18th birthday, they asked if I was doing anything special for him this weekend, I mindlessly said, that I was taking “Him and Sean” out for Sushi, and to see the new Avengers movie.

They questioned who Sean was, as they had never heard the name. Again, I mindlessly, instantly replied “oh, His boyfriend”, the second it came out of my mouth, I knew I had really, really, fucked up.

My parents are VERY old school, VERY conservative, and VERY Lutheran. They immediately started in on me, about “how could I allow this” and telling me that I was a horrible parent, and what on earth would people say about me as a father for allowing my son to choose that “disgusting and unchristian lifestyle“.

And telling me that my wife was a horrible mother for being too overbearing and making him gay, and it’s my fault because I allowed him to not play sports. “This would have never happened if you sent him to a Christian school” {Yes, I am [serious] there are people who still think like this in the world}

It gets worse. They told me that he wasn’t welcome on Sunday (they were having a party for him). This is where I totally snapped. I snapped so bad, I’m not sure about half of what I even said to my parents.

I basically told them that they were horrible people, and horrible Christians (I think ALL religion is bullshit, but I threw this in there as a zing) and that they weren’t going to tell me how to raise my children, and if this is how they were going to be, the next time I’d see them is when they were laying in a wood box, just to make sure. (I took that too far, but all I saw was RED, YOU DO NOT FUCK WITH MY KIDS)

Now I don’t know what to do. I’ve made such a mess. I’ve been having a meltdown with my wife, what do I tell my son!?! “Sorry Josh, your father is a piece of shit, and I just ruined our relationship with the family, because I wasn’t paying attention.”

I SHOULD NOT HAVE TO DO THIS. THIS IS 2018 FOR FUCK’S SAKE. I feel awful, and I’m pissed off because I shouldn’t have to feel awful, because shit like this shouldn’t happen.

I’ve known my son was gay since 2nd grade. It never mattered. The day he actually told us, he was so calm, I’ll never forget it, we were all in the kitchen getting dinner ready for the grill, and he just looked at us, and said in the middle of conversation “You know I’m gay, right?”

We stopped for a second, and I just said, “yeah, we do, do you want corn or beans as a side”? He laughed, we all teared up a bit, we hugged him, then almost instantly we went back to talking about how bad we both wanted the 75th Anniversary edition Jeep.

This is so fucked up. HOW do I handle this!?! What do I say when we don’t go over there on Sunday. My kids (18 & 16) are (thankfully) old enough to understand, but that’s not the point.

I just feel like I failed as a parent on this one. My wife and I more so, are both messes right now. I don’t want to hurt my son, but I feel like I have somehow betrayed him, this wasn’t for me to tell.”

One commenter on Reddit, summed it all up nicely:

My only thoughts are:

Your son’s sexuality is so ‘normal’ to you that it doesn’t even factor in as something to hide. This is, without a doubt, one of the most incredible things you can do to accept him.

You stood up for him and Sean and their happiness.
Your son is one VERY lucky person to have a role model like you.