Halloween is almost upon us – and every self respecting gay man needs a marvelous costume. We’ve scoured the selection offered by our friends at Costumes4Less and HalloweenCostumes – and have come up with the definite guide.

And there’s one more unique option – go as anyone you want, even your boyfriend (or an imagined one) – by creating a custom mask. Spartan Warrior – Looking for a way to wear a cool costume AND show off all that hard work you’ve done at the gym? This is it. Indian Warrior: Let’s face it, Indian warriors are hot. And with this particular costume, you also get to show your well-built arms, so it’s a win-win.

Tight End Football Player – No, sorry, we can’t sell you the model along with the costume. But at least you can turn heads at the Halloween party just as well as he does. Swat Team – This costume can serve you in one of two ways – you’re either a swat team cop, or a stripper dressed as a swat team cop. Either way – you’ll be hot. Aquaman: He’s a guy with superpowers and he’s always wet. Plus, look at those aquatic abs you’ll be getting…

Thor: He’s a Norse god, and now you can be one too, hammer included. (Human model not included, we’re sad to say)

Superman: You can never go wrong with Superman. This costume even comes with complementary muscles (just in case you don’t have any).

Batman: It’s the classic Batman – not dark and miserable like he is these days, but campy and fun! With abs!

Robin (Classic Version): Batman is never complete without his beloved Robin. Go by yourself, or join a Batman friend and go as a couple. 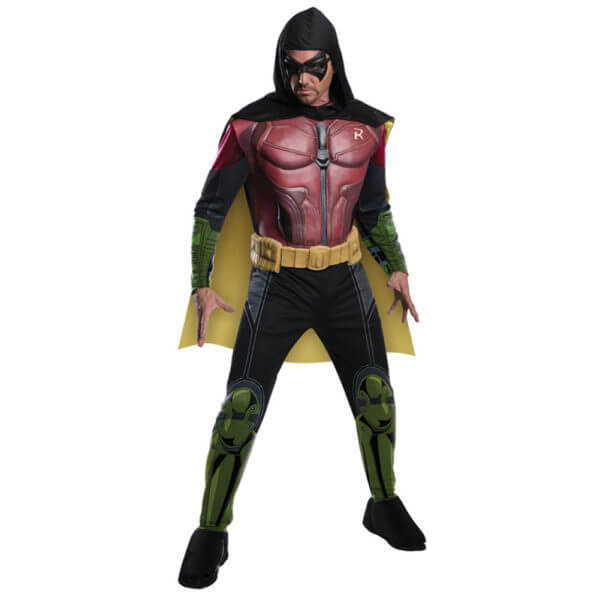 Robin (Arkham Version) – Classic Robin is cool, but if you want something with a bit more edge to it, or dare we say – sexier – go with the Arkham games’ version of Robin. Trust us, if you arrive at a party dressed like this, you will not go home alone. Star-Lord (Guardians of The Galaxy) – Who doesn’t want Chris Pratt (AKA Star-Lord)? Well, you can’t have Chris, sorry. But you CAN look just like him, which is just as best.

Frank-N-Furter: With your hands on your hips, it’s the pelvic thrust that will really drive your buddies insane. Harry Potter: Just a boy and his magic wand. The Scarecrow (The Wizard of Oz) – You can’t beat the classics, The Wizard of Oz is every gay man’s bible. And the scarecrow? We miss him most of all.

Sons of Anarchy: Wanna be pals with Charlie Hunnam? First you need the jacket, THEN he might show you his weapon. A Vampire: Vampires are cold and mysterious, but there’s also something very sexy about them. Now you can be one too.

Lola the Showgirl – Always wanted to be a showgirl? Now you can, at least for one festive night. The Pope – The Pope isn’t very big on gay rights (though the current one is better than previous ones) – which is a great reason to impersonate him, with style!

Rainbow Skin Suit – And finally, if you really want to show your gay stripes – this rainbow colored skin suit is just perfect.