Father-in-law issues are not just straight-romantic-comedy issues. Sometimes you don’t get along with your boyfriend’s dad – which is what happened to this guy on Reddit, who just can’t get a break with the dad. 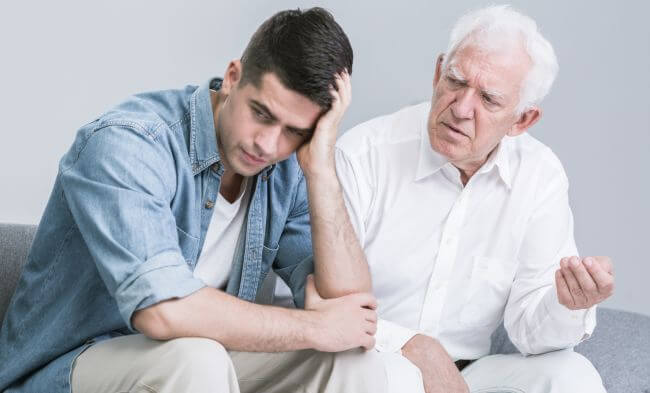 “I haven’t done anything for his dad to hate me”, he writes, “but every time we visit the family, he never misses an opportunity to let me know how awesome his son’s ex was.”

And it gets even worse than that:

Not kidding, he once asked me to my face if I thought there was a chance of them ever getting back together. I laughed it off, but I was obviously hurt by it.

From what I’ve heard his ex is this masculine guy who defies all gay stereotypes. I’m sure it made it easy for his dad to repress his homophobia, and convince himself that they were buddies instead of lovers.

With me he is reminded of his son’s sexuality; I’m not saying that I’m effeminate, but I’m skinny, I look about 17 even though I’m 23, and I don’t chime in when they talk about sports.

I usually don’t care about being liked, but obviously his son means a lot to me, and he means a lot to his son. It’s tough cause he isn’t even trying to give me a chance.

Every time I initiate conversation, I’m met with nonchalance. I don’t wanna come off as annoying and desperate, but I kinda need his approval.

The Redditors were quick to offer some advice:

Have you discussed this with your boyfriend? He should be your ally in this situation. At the end of the day, your boyfriend is in a relationship with you because he likes who you are – your personality, your body, your looks. That’s all that matters.

His dad can feel and act however he chooses, but the more time passes (meaning, the longer you two have been together, and the longer it’s been since his son and the ex broke apart) the more ridiculous his behaviour will become, should he choose to keep this up.

And a snappy comeback suggestion…