Almost every gay guy has at least one high school crush in his past – and in most cases, unfortunately, they were straight. But what do you do when you return to your hometown after many years, and your old crush sends you a surprising message? That’s what happened to this guy on Reddit. 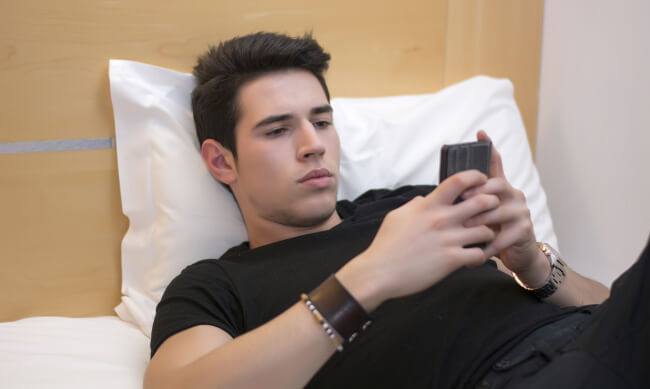 “I moved to Chicago for college and then LA for work, but now I have returned to my small hometown”, he writes. “I only really talk to one friend from High School, but there are a few that I randomly keep in touch with. One of those being “Tom”. Tom is a few weeks older than me. Blonde hair, blue eyes, blonde scruff (my kryptonite). He was the kicker on the football team, as well as a member of the basketball and track teams. Plays the guitar. He’s a babe.”

And then things got all weird:

We didn’t keep in touch during college. Our friendship always remained the same after I came out. He’s always had many, steady girlfriends. I have never really had the inclination that he was gay/bi/curious.

About a month ago, he hit me up to see if I wanted to chill and smoke. I didn’t hear from him for a couple weeks until last night.

I woke up at 2am to pee and on my phone was a snap from Tom. He had sent it about an hour ago. It was a black screen, clearly in a dark room with the text that says, “Want a cuddle buddy?“. HOLY FUCK – Did I read that right? Blood rushing :O

I responded with black screen, “Yes.”

It’s now the morning after and he just opened it. No response. Which is understandable since no one wants to low-key cuddle in the morning.

But now I’m questioning it all. Did he send that to the wrong person? I don’t think so. If so, he would have noticed and sent another clarifying the mistake. Was he high? Probably. But does that matter?

What is a cuddle buddy, anyway? Just casual spooning? A little action? A lot of action? Honestly, I’d take any of it.

A few days later, the guy was back with an update:

It’s not what you and I wanted to hear, but it also is NOT a definite end to this story.

Here are my thoughts on all of this:

I don’t think he’s gay. I really don’t. I think he’s an open-minded guy, but also perhaps a guy that is currently going through a bout of depression. I hated typing that, because who do I think I am making these assumptions. But that’s just what my intuition is telling me.

I think he’s reaching out for some form of human bond. So… as a friend, I am going to be there for him. I will reach out and try to hang with him soon. No agenda.

What do you guys think? I could be wrong. Maybe he does just want me to slob on his knob.

And he concluded with this super-statement:

P.S. – Apparently I’m the straight-guy-whisperer. If any of this develops into more with Tom, I will have successfully messed around with all three of my straight high school crushes. Hopefully completing the trinity will unlock the gates to Valhalla. WITNESS ME.