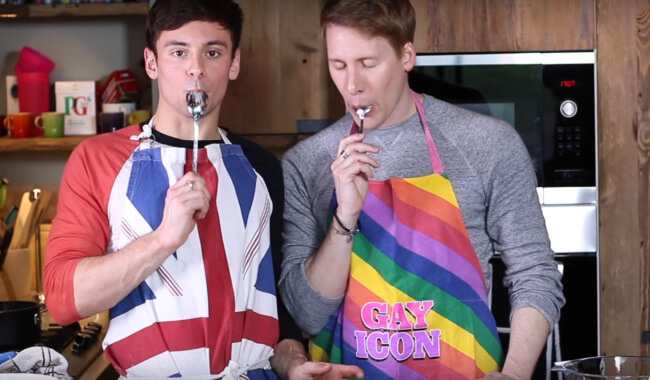 The wedding took place at the Bovey Castle hotel and golf resort in the UK, after Tom and Lance hired the entire venue, with friends and relatives flying in from all over the world.

Tom posted this photo, with the following caption:

On 6th May 2017, I married the love of my life, @dlanceblack ❤️ We shared the day with 120 of our closest friends and family, from Texarkana to Plymouth! Thank you to everyone who made this weekend the most special weekend of our lives!

So… what did you do this weekend?

Another beautiful photo from Lance:

Tom (22) started the day by reenacting a scene from Shakespeare’s Romeo and Juliet – he stood on the balcony of the Bovey Castle, and sang to Lance (42):

According to the Plymouth Herald, After Tom and Lance exchanged their vows, members of the London Gay Men’s Choir sang the Bruno Mars song Marry Me. There were several speeches made during the ceremony, which included many tributes to Tom’s dad Rob, who  died of a brain tumor in 2011.

The feast which followed the ceremony included a wedding cake made by Tom.

Near the end – there were fireworks…

We will update if and when more photos are shared.