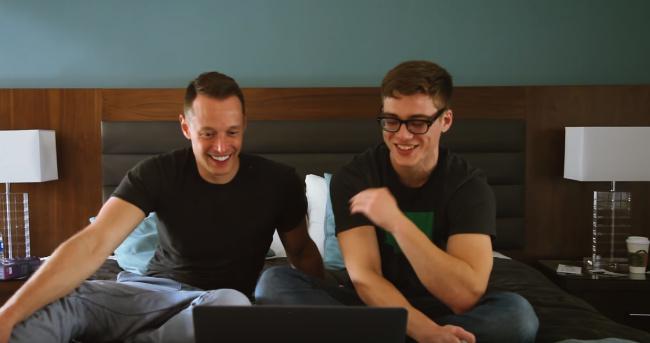 Blake’s glasses have become part of his trademark and image by now – but back then, in his very first professional scene, he wasn’t wearing his glasses, because the studio was “afraid it would be a flop”. Therefore, Blake is almost unrecognisable to his present fans – including to Davey.

However… “Your dick is the same, that hasn’t changed”, Davey is quick to note. “I recognise your dick more than your face in this video.”

Blake, however, is surprised to hear that. “Really? I think it’s almost… bigger now.”

Surprisingly, Blake says he wasn’t nervous, filming his first scene. “Maybe because I was camming for a year before that. The weird part was that other people were there, filming and watching me.”