Leaked nude photos of popular social media figures (not to mention celebrities) are almost an epidemic in this day and age. And so, popular YouTuber AbsolutelyBlake ended up with one too – as a nude photo of him started doing the rounds on Twitter.

Now, in a new video, Blake responds to the photo, that his fans kept tweeting… to him. “It’s nothing special, it’s like a pixel.” 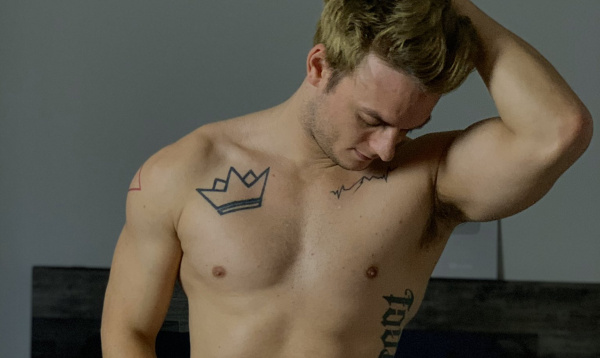 AbsolutelyBlake is a well known (and, yes, hot) YouTuber (175,000 followers and counting!) who keeps us entertained by doing things like getting naked in the snow, showing us his big wood in the forest, or playing Semi-Naked Paint Twister with his sexy buddy.

So yes, he tends to post nude photos on his own – but those only show the backside. The “leaked” photo, which was grabbed from a leaked video that somehow made its way online, showed, well, the front side – with Blake rope swinging into a river – in the nude.

“To confirm, yes, it’s me”, Blake explains in his new reaction video. “But it’s nothing special. You guys can go hunt for them, it’s probably really easy to find now…”

(Pretty easy indeed, because Blake ended up tweeting the photo on his own account.)

“I’m so far away, I’m soft, it’s like a pixel, like a shadow in the air. It’s hilarious that stuff like that can get dug up and found, it blows my mind…”

Blake goes on to tell how there are also a lot of PHOTOSHOPPED nude photos of him all over the web – and one in particular almost made HIM believe that it was real.