Popular singer-songwriter Steve Grand had a bit of a scare last night, when the hotel he was staying at had to be evacuated due to a fire. “It was a really terrifying moment, to feel trapped.” 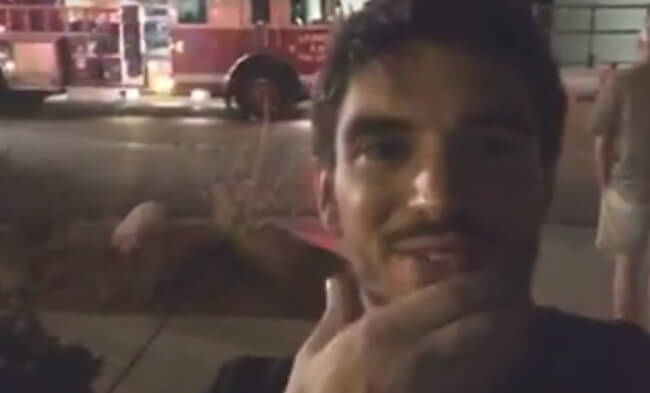 Steve was performing in Akron, Ohio yesterday. After the show, he went back to his hotel, and just as he was getting ready to go to bed – the alarm went off. Steve documented the event and posted the video on his Facebook page.

“My hotel in Akron was just evacuated. I was getting ready for bed and there was an alarm sound and a recorded voice said “everyone get out and don’t take the elevator“.

I assumed it was a drill, but I started making my way down the stairs, and I realised smoke was actually coming from below me. It was a really terrifying moment, to feel trapped.

People were definitely panicked, it’s a spooky situation. The fire truck got here right away. Props to them – I would not want to be going into that building right now. I didn’t take anything with me from the room… and I got paid in cash…”

By now, we’re happy to report everything turned out OK, and Steve was able to get back to his room and have a good night’s sleep. Watch the video right here: