Naked selfies on Grindr are nothing new, and even straight dudes who take their own naked selfie is not unusual. But for this guy on Reddit, the two came together in a very unexpected – and embarrassing – way. 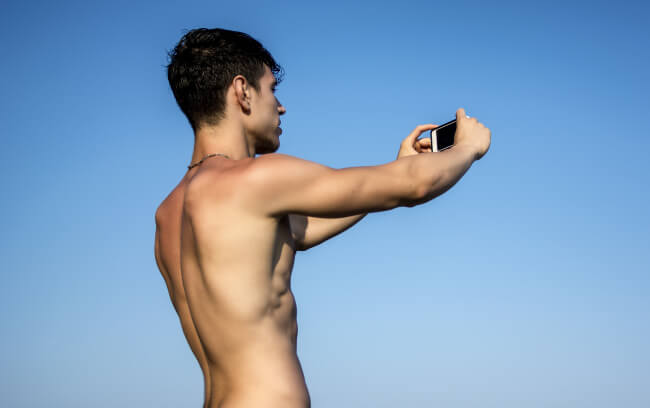 “My wife was out of town last week and I was feeling a little frisky”, he writes. “I had just gotten out of the shower and wanted to revel in my manhood… so I did what felt natural, I stood in front of my full length mirror and took a nude selfie.”

So far, quite ordinary. But then, things took a turn for the worse.

I never planned on sending this to my wife as she isn’t huge on seeing “it” in photos. So before she got home I made sure I deleted it.

Or so I thought.

Not even a week later I receive a Facebook friend request. We have no mutual friends so I go to message him to ask my usual “do I know you?” question when I see a simple “hey” waiting for me. I still ask my question and he replies “Not sure but pretty sure someone is faking being you on Grindr.”

Well at this point I figured that’s sort of flattering that someone would do this and almost laughed. I kept asking some more questions when he reveals to me that he “took a screenshot of the picture they sent him” before the profile was deleted.

Now he had my interest. I ask him to send it. And you guessed it, there’s a screenshot of me in all my glory in the same photo I had taken the week prior. At this point I’m freaking out hardcore wondering how this could even happen?! My heart was racing. I haven’t even lost my phone!

Well it turns out I had my phone set so that any photos I took on it auto uploaded to my google photos which I THOUGHT was a private album by default.

I look in there and see the photo. I immediately deleted it. I then deleted every other photo off my cloud account immediately and went crazy locking down all my other social media accounts too just in case.