London Pride took place today (Saturday), in the midst of the #Brexit turmoil – but nothing can stop love, and – in the UK – marriage (it was legalized there in 2014), as two London Metropolitan Police offices knelt down to propose to their partners, to cheering crowds around them.

In the first one, we see an officer proposing to his boyfriend, who was standing with the crowds. “He said Yes”, the tweet confirms:

Moments later, another photo was posted, of a second couple, this time of two officers.

Turns out it IS possible to propose without Bruno Mars! Congratulations to the couples – we’re waiting for the wedding videos. 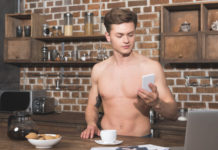 My “Straight” Friend’s Wife Wrote To Me: ‘Stop Having Sex With My Husband’