Don’t we all wish Justin Bieber would personally send us photos of himself in his underwear? At least one guy got to enjoy exactly that – Mark Wahlberg. Unfortunately… he’s complaining about it now, on the Conan show. 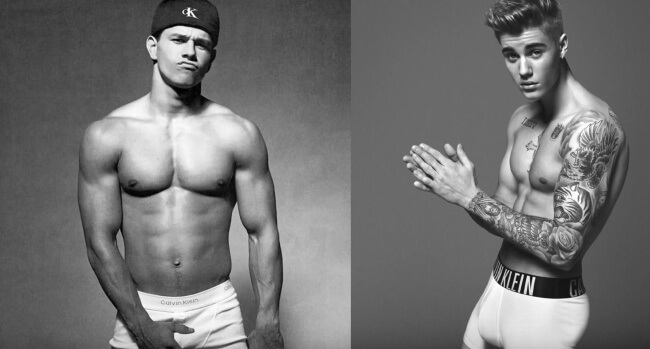 Back in 1992, two years before Justin Bieber was even born, Mark Wahlberg – known back then as Marky Mark – was one of Hollywood’s handsome bad boys. And as such, he did a now-famous series of underwear ads (and later TV commercials) for Calvin Klein.

Years later, Justin Bieber’s turn as an underwear model came up – and he did his own series of sexy ads in his tight Calvin Klein’s. Bieber was so proud of himself, that he decided to personally send the photos to his underwear mentor – Mark.

Mark was on Conan last week, telling the whole story:

He did send me the pictures and I was like, ‘You don’t send a guy pictures like this in your underwear.’

He was proud, you know, it was a big deal for him to do. And I was like, I am at 45, a dad and a husband, a father of four, I’m trying to move away from that image.

Mark also tried to defend Bieber’s image, in light of the many reports of his sometimes-erratic behaviour.

People give him flack for growing up in the spotlight and they say he has a bit of an attitude, but look at the look on my face [in the ad], I mean, I was the biggest punk in the world. He’s very nice and young and polite in comparison to what I was.

Watch the clip from the show right here: