Harry Styles was on The Late Late Show with James Corden all week this week, and yesterday it was finally time for him to take in part Carpool Karaoke.

The result was magnificent, with Harry wearing some tight raunchy clothing, and doing a perfect Kate Winslet a-la Titanic impersonation. 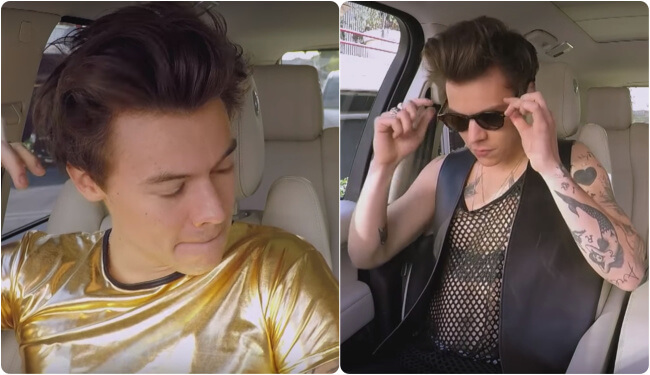 Having released his first solo album this month, 23-year-old Harry Styles is leaving his One Direction days behind (for now), jumping from screen to screen. Carpool Karaoke was a perfect fit.

Harry and James started out with Harry’s biggest solo hit, “Sign of the Times”. Then, they moved on to talking about crying (“I cry on stage, but in a cool way”), and shirts. James claimed that Harry could pull off wearing basically any type of shirt, being the rock star that he is.

“I don’t know if I could wear that”, James says, pointing at Harry’s colorful shirt. “There’s only one way to find out…”, Harry says teasingly – and they switch shirts.

Harry then gets a super-tight golden shirt. “It’s quite comfortable! It’s a bit nipply…” – and then the nipples come out, as Harry gets to wear a net shirt.

They’re back to singing, when James suggests they re-enact scenes from famous romantic comedies. When it’s time for Harry to be a Kate Winslet for James’ Leonardo DiCaprio – things get heated up…