“How nervous can you be about something when you don’t have to worry about getting a boner and licking an asshole and getting your ass licked? it’s just… OK, let’s do it.” 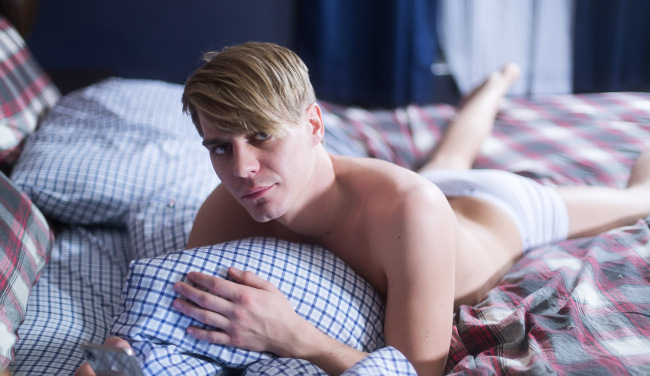 For example, he reveals his crazy coming out story – which involved a Grindr hookup and… the police.

“I was 17 at the time. We went through moves and craziness and we were staying in a hotel in St. Louis. At one point late at night I set up a Grindr hookup, with an older guy. He came and he picked me up from the hotel and took me to his house.

When I left the hotel my twin brother called me, and I probably should have answered, but instead, I turned my phone off.

The police pulled over and word got out that I was with some older guy who met me in an internet app. So I was outed to my entire extended family on my dad’s side by getting caught on a Grindr hookup with an older guy. It was quite embarrassing.”

At some point, like any relationship, we started having problems. We moved to Vegas together, and we were kind of having issues. We started looking at houses and got the house that we wanted… Shortly after we took a family vacation to Texas. And he gets me a ring and proposes. Of course I said yes, I didn’t even think about it.

For a while, I was excited about taking this next step in the relationship. And it was official and it was announced on Twitter and it was really exciting for quite some time.

And then we had some struggles at home, I made a really tough decision and we broke up and I moved into my own apartment. It was the first time that I ever lived on my own.

I wanted to try something else. It’s important to experience single life.”