50 years ago, in 1967, homosexuality was finally decriminalised in the United Kingdom. To mark the occasion, YouTubers Trent and Luke brought together two openly gay individuals – one is Percy, a 78-year-old man, and the other is Louis, a 13-year-old boy.

With 65 years between them, Percy and Louis sat down for an emotional and inspiring chat, talking about coming out to your family – then and now, the meaning of love, and what it was like to be in danger of getting arrested, simply for loving another man. 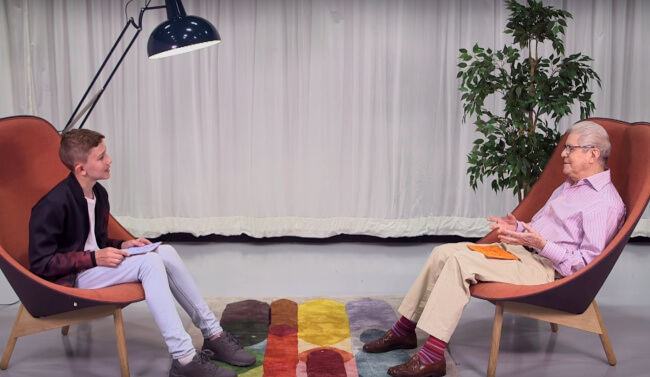 Percy, who is now 78-years-old, has been living with his partner Roger, a 90-year-old retired History professor, for 51 years.

Louis is a 13-year-old boy, still in school, who came out to his parents at such an early age – and even has a boyfriend.

“My friends in school support me”, Louis tells of his coming out experience. “I was confused, I didn’t know what it was at first, I didn’t know there was such a thing as liking a boy. After A while I knew that I was gay and I accepted it.

Coming out to his parents was not an easy moment for Louis.

“My parents were really nice, they told me they loved me no matter what, whether I was gay or straight. My whole family supports me.

I came out to my parents by sending a message. My mother came down the stairs and asked – ‘is it true?’ And I was in shock and I started crying… But she sat me down and said ‘you have nothing to worry about, nothing to be scared of.'”

Percy, on the other hand, never thought to tell anyone he was gay when he was a child – and only came out – to some people – when he was 16.

“I had a very close friend at school with me, and for some reason he was sent to a boarding school – his parents must have found out that he was gay so they sent him away. Then they brought him back…

I was speaking to him, and then we both admitted to each other that we both liked guys. I remember that he decided that we should go to a gay club. He just thought it was fun, but it was an eye opener that there were other people who felt just like we did.”

When Percy finally came out to his mother, years later, it was after he already moved in with his partner, Roger.

“Roger and I were living together, and my mother was coming to see us, and I was showing her around the place and said – ‘this is Roger’s and my bedroom, and here your bedroom.’

And she said – ‘Yes I know darling, but this is YOUR bedroom, isn’t it, which you’re turning in a guest bedroom?’ And I said no, my bedroom is Roger’s bedroom.

And she just looked at me and I said – ‘Do you want a cup of tea or a scotch? And she said – I think I’ll have the scotch please.'”

Watch the full video, where the two also talk about homosexuality being illegal back in the day, and Percy’s advice for Louis: