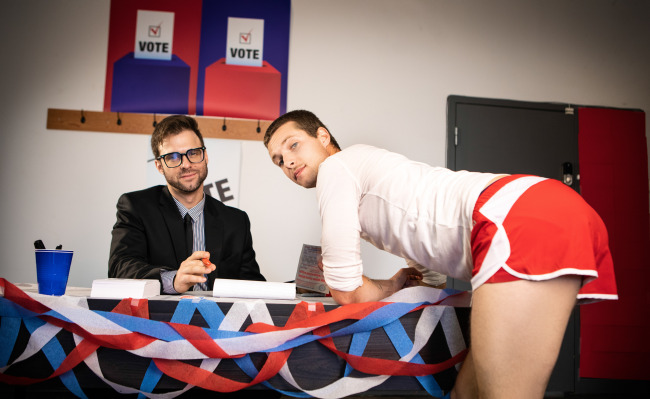 Some are offering special deals, while others are focusing on election and voting-oriented scenes, and yes, it’s as naughty as it sounds.

But there’s more… so here’s a quick roundup (just remember that most of these links are very NSFW!) And yes, of course, they have a scene that’s perfect for these elections. In Stroke The Vote, Benjamin Blue is more interested in taking voting booth dick pics than actually marking his ballot.

Check It Out On Men.com

BelAmi really needs no introductions, as they’ve been around for more than 25 years, with the hottest boys from Europe. 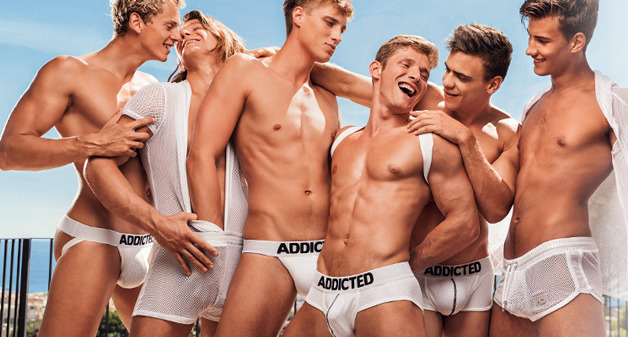 But even though they’re European, they’re celebrating the US elections with a – well – “Erection” sale. That means you can get 50% off ALL their plans, which is a rare level of discount. 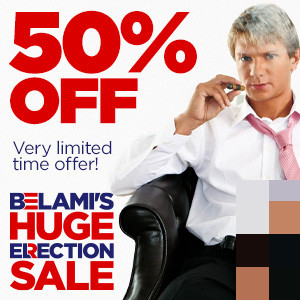 So naturally, with such a huge selection of XXX-Rated movies, they were quick to find a hot… “political” one – Golden Gate 5: The Cover-Up. The film takes on San Francisco’s real-life nudity ban, exposes local politicians and most importantly, finally gets to the bottom of Christian Wilde.

This season, anti-nudity Supervisor Scott Cox (Dale Cooper) tries to clean up the city, only to find that the dirt is on him. From sexy protestors Logan Stevens & JD Phoenix to conniving escort Austin Wilde, the sex is so hot that not even the afternoon fog can cool it down.

But wait – Naked Sword are also celebrating with a very special, very time-limited deal: subscribe for just $20/month, FOR LIFE. That is, as long as you stay – those $20 won’t go up.

Check It Out On Naked Sword

Their unique new scene, “Political Party Bottom” plays provocatively with the obvious and highly politicized homophobia/gay connection. It is a statement about overacting the masculine persona in an effort to suppress the inner feminine. 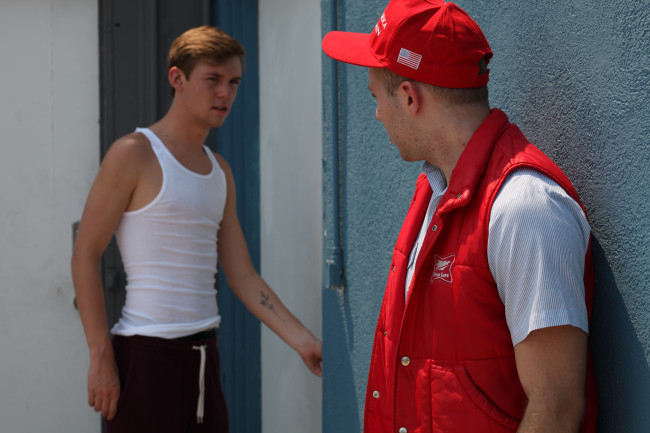 An endless parade of anti-gay politicians and religious leaders have been arrested in bathrooms for soliciting sex, caught up in scandals with male sex workers and so on. The quote, “the lady doth protest too much, methinks” comes to mind. These individuals speak out against others in an effort to cover up their own conflicted feelings and inner turmoil.

In Political Party Bottom, we see that conflict unfold in real-time through the experience of a Trump supporter. His MAGA hat is a symbol – and, once it falls to the floor, the man is able to surrender into his true identity. For the first time, he kisses his partner and allows himself to be the ravenous party bottom that he really is.

Of course, it gets very NSFW – so you’ll have to head on over for the uncensored version.

Check It Out On Himeros.TV