Gay men all over the world are familiar with the “Naked Men In The Shower” situation. Either from the locker room in school, after sports class, the showers at your local gym, or any other situation in which you find yourself with a group of naked strangers in a shower. Now, there’s a video game about it. 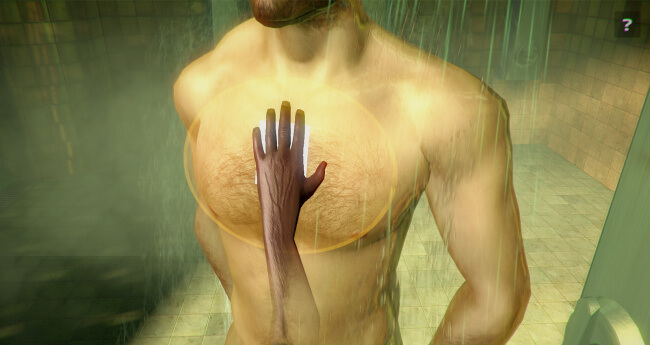 When the game starts, you’re in the shower with a bunch of naked men. Then a particularly buffed one walks in, and asks you to help him out – which you’re happy to oblige to. There starts the actual “simulation” – you’re being asked to scrub this dude’s various body parts, by moving the mouse. You scrub his back, for example. His biceps. Oh, and his nipple, because that’s what men do in the shower.

If you scrub “correctly”, your new-found friend makes appreciative sounds, just like in real life. He moans, and encourages you with sentences like “That’s the stuff!”. If you scrub in a bad way, he gets angry. You DON’T want to get a naked hunk in the shower angry.

Once you’re done with the guy (and get rated for it!), he walks away. Don’t worry, he’ll be back – but only at specific real-world times. Yes, the game checks your system’s clock, starting from the moment you first load the game – and only lets you meet this hunk over a posted schedule of gym classes. You actually have to WAIT for your new pixellated BFF.

You can see the first two minutes of the game right here:

In his blog, Yang discusses the reasoning behind the game and its showers:

“Older gay men understand this in a tradition of cruising and gay bathhouses, while younger gay men might narrativize it more as a reversal of bullying dynamics in high school gym. Above all, the locker room is understood normally as a place of danger, where you could be discovered or outed or beaten for “looking at someone the wrong way” even if you were just minding your own business — and there’s nowhere to hide, not even in your own clothes.”

Not convinced yet? Go and download the game – Yang offers it on a “Pay what you wish” model, and it’s always a good idea to support experimental games with gay themes. And try to get to the ending. It’s a bit… disturbing.