Oh, how we loved “Weeds” – and no, not just because it was a cool show with a cheeky subject (suburban mother selling drugs!), but mostly for Hunter Parrish – aka Silas Botwin – who was the hottest blond thing on our screens back then. Thankfully, they undressed him A LOT on that show, so we also got to witness his impressive body over and over. 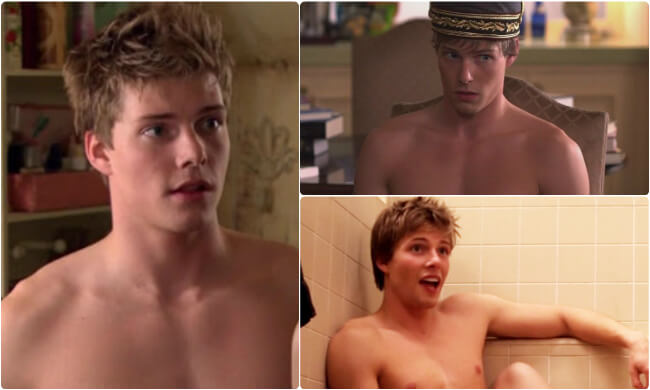 Now, Hunter is back on our screens, for Amazon’s “Good Girls Revolt” series. The show, set in 1969, “follows a group of young female researchers at “News of the Week,” who ask to be treated fairly”. Hunter plays one of the male workers at the newspaper.

So, this is a great excuse to look back at some of Hunter’s hottest moments…

1. Semi-Naked Bubble Parrish – On season 7 of “Weeds”, Silas took part in an “art exhibition”, and then it popped…

2. On season 6, Hunter found out about the perks of college –

And another one from that same scene –

5. On season 4, he had some hot moments with none other than Modern Family’s Julie Bowen:

6. Then there was the time he was paid to read to a man – looking like that

8. Had enough? Just look at that face…