Let’s face it – we’ve all fantasized about Tom Welling’s head at some point. Not necessarily to OWN it, but you have to admit, he has a beautiful head.

Turns out, you CAN own Tom Welling’s head – if you buy it from the Chinese Mega-Store site, Ali Express, currently for only $23.50, from a manufacturer called, no less – “Head Play“.

Officially, you’re supposed to use the head for a 12″ action figure (not included – meaning, get your own Tom Welling body), but we’re sure you can think of lots of uses for Tom Welling’s head.

Do note the important warning on the product’s page, though: 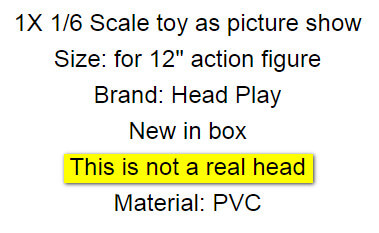 So, are you going to buy one? In fact, get two – Christmas is right around the corner. And if you’re into men who are a bit more… rough, there’s always the Head of Hugh Jackman